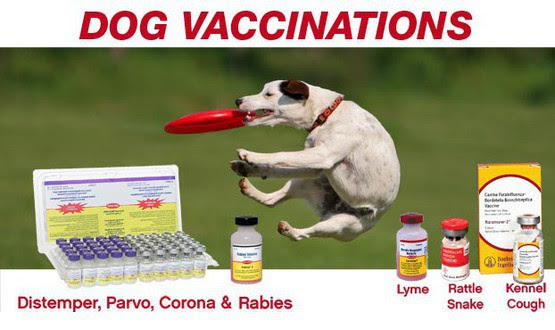 Two years ago, the American Animal Hospital Association (AAHA) canine vaccination task force updated their vaccination guidelines. The task force changed the previous annual protocol for core vaccines to an every 3-year protocol, with the exception of 1-year rabies shots. (In many states you can choose either a 1-year or 3-year rabies vaccine for your pet. If you choose a 1-year shot, or if your state doesn’t offer a 3-year vaccine, the annual protocol is required by law.)
The task force also acknowledged in the updated guidelines that for non-rabies core vaccines, immunity lasts at least 5 years for distemper and parvovirus, and at least 7 years for adenovirus. This means that even the updated 3-year protocol is overkill.
Veterinarians who are vaccine minimalists, and certainly I am one of them, viewed this protocol change as a small step in the right direction. We feel re-vaccinating pets against diseases they are already immune to creates significant and unnecessary health risks

Why Are 60 Percent of Vets Still Doing Annual Re-Vaccinations?

Sadly, despite the new guidelines that are now two years old, members of the traditional veterinary community have been slow to adopt the new recommended protocol for vaccinations for dogs.  According to Mark Kimsey, a DVM who works for Boehringer Ingelheim Vetmedica Inc., a veterinary pharmaceutical company, “Basically, what we’re seeing is there’s a gradual trend toward three-year protocols.”
Dr. Richard Ford, a DVM who is on both the AAHA canine vaccination task force and the American Association of Feline Practitioners (AAFP) feline vaccination advisory panel, agrees with Kimsey. “It’s a slow change,” says Ford. “Most practices still recommend annual vaccinations. All the vet schools are teaching triennial vaccinations.”
Ford believes, based on feedback from vaccine manufacturer sales reps, that 60 percent of veterinary practices are still re-vaccinating on an annual rather than every 3-year basis. “Some acknowledged the reality and changed their protocols, while others, fearing loss of a major source of revenue, argued against anything other than the time-honored paradigm: annual boosters,” said Ford.

It appears there’s no shortage of vets out there willing to openly admit they don’t want to lose the income from unnecessary vaccinations and new, safer protocols be damned.

Hopefully you’re not taking your own pet to a veterinarian with a similarly misguided, dangerous practice philosophy.

Unwilling to Change? Addicted to Easy Money? Or a Bit of Both?

According to Veterinary Practice News, Dr. Gary D. Norsworthy, owner of Alamo Feline Health Center in San Antonio and a practicing vet for 40 years, is among the 60 percent who aren’t budging from an annual vaccination schedule for their patients.
His rationale is that he has a number of clients who will only bring their cats in for wellness exams if they believe vaccines are needed. Norsworthy says he’s determined not to lose the opportunity to annual checkups on cats in his practice. So he uses only the 1-year rabies vaccine, and tells his clients he must see their cats yearly.    Norsworthy believes “Internet chatter” scares cat owners into believing vaccines are dangerous. He notes that his practice vaccinated 25 percent fewer cats in 2012 compared to 2007. He says he sees only one case of feline vaccine-associated sarcoma for every 65,000 vaccines he injects.  Clearly, Dr. Norsworthy, like many conventional vets, makes no connection between other feline health problems and repeated unnecessary annual vaccinations. Like Norsworthy, many DVMs don’t know or don’t choose to know about the dozens of other health crises that can arise as the result of vaccines, and especially as the result of repeated re-vaccinations.
Rather than figure out how to give clients logical, legitimate reasons to bring their pets in for regular wellness exams, the majority of vets apparently prefer to continue the risky business of re-vaccinating their patients year in and year out.
Could it be this approach to pet care is why veterinary visits have steadily declined in recent years?
Is it really so difficult to explain to pet owners the benefits of bringing their dog or cat in for at least one wellness visit a year?From my experience, it’s not difficult at all. I see the majority of the patients in my practice for wellness visits twice a year, and it is extremely rare that I administer any vaccine to an adult animal, excluding the mandatory 3-year rabies.
Also according to Dr. Ford, there are some DVMs who would like to follow the new guidelines, but are concerned that vaccine product labels include text that reads “annual booster recommended.”
This seems a very strange argument in favor of continuing annual vaccinations, doesn’t it?  If cat and dog vaccinations advisory panels have established new recommended guidelines, why would a vet choose instead to take the advice of the vaccine manufacturer’s product label?
Source: Dr. Karen Becker